The Lords of the Depths #1: The Sea King 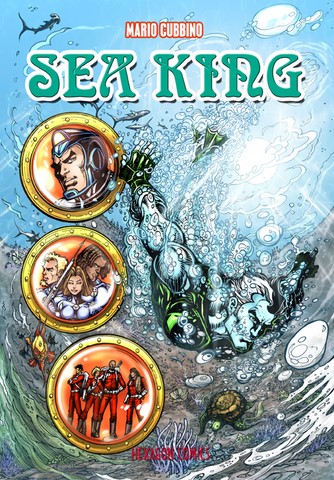 THE LORDS OF THE DEPTHS #1: THE SEA KING

Underwater heroes and amphibian characters from Jules Verne’s famous rogue submariner, Captain Nemo and his myriad imitators, to Marvel’s Sub-Mariner and DC’s Aquaman (1941), have always proved popular with comic book aficionados.
Hexagon Comics introduced their own “Lords of the Depths” in six series, which we have sampled here in three issues. This is the first.
In this volume, meet:
The Sea King (1969), drawn by the incomparable Mario Cubbino, starring. Daniel Cluny, an ex-captain of the French Navy, who was the subject of an experiment that gave him the ability to live and breathe underwater.
Bathy-09 (1978), a unit of the International Oceanic Force, created to police the undersea world, comprised of American skipper Tony Yale, French pilot Jean Pujo, and Italian navigator Bruno Valeri, cruising the seas aboard their submarine, the Shark-09.