The Lords of the Depths #2: Commander Neptune 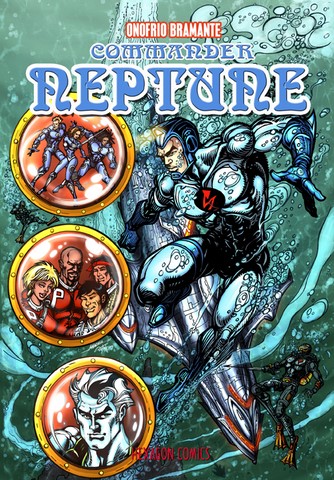 THE :LORDS OF THE DEPTHS #2: COMMANDER NEPTUNE

Underwater heroes and amphibian characters from Jules Verne’s famous rogue submariner, Captain Nemo and his myriad imitators, to Marvel’s Sub-Mariner and DC’s Aquaman (1941), have always proved popular with comic book aficionados.
Hexagon Comics introduced their own “Lords of the Depths” in six series, which we have sampled here in three issues. This is the second.
In this volume, meet:
Commander Neptune (1965), drawn by Onofrio Bramante, the leader of ABYSS, a special underwater commando of the International Oceanic Force, who leads the powerful, sophisticated submarine, the Arethuse.
The Patrol of the Depths (1975), an organization founded by Professor Jean Monnier, comprised of spelunkers and geologists Terry Bronx and Sandy Crown; Native American Seminole Poldus, and African American Tobie Drugg.