The Time Brigade #2: Mister B. 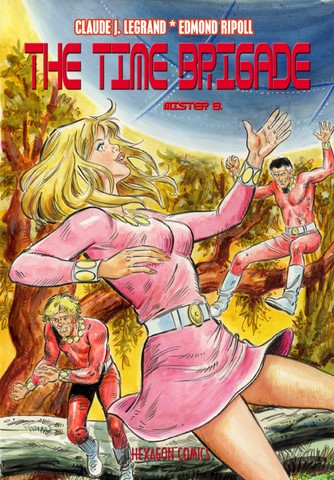 THE TIME BRIGADE 02: MISTER B. Stories by Claude J. Legrand. Art & cover by Edmond Ripoll.
4. The Statues from the Past
5 Mister B
6 In the Night of Time
Created in 1972, The Time Brigade is a sci-fi series written for Futura by French SF author Claude J. Legrand and drawn by Spanish artist Edmond Ripoll, the creator of Jan Europa and Doctor Impossible.

The Time Brigade, which was initially influenced by Poul Anderson’s classic Time Patrol, quickly departed from its model and went off in previously unexplored directions. It played an important role in the development of a coherent Hexagon Universe.

The Time Brigade monitors a segment of the time-space continuum from six billion years ago to one million years in the future. It is based in the 41st century and operates with teams of agents called a "Hand," reporting to an AI known as the “Thumb.”