Strangers 13: The Children of Zade 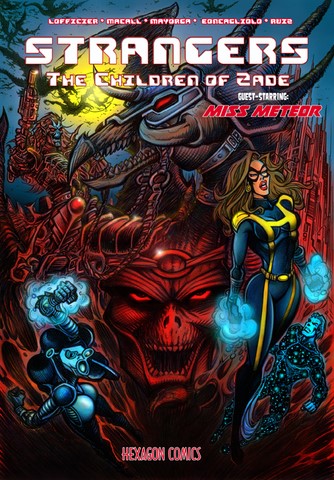 
HOMICRON is a NASA scientist whose body is inhabited by a mysterious alien from planet Alpha. STARCYB is a servant of the Towers, supremely powerful cosmic entities. FUTURA is a mysterious woman from a parallel dimension. JALEB is the secretive agent of a Galactic Federation of telepaths. JAYDEE is a teenage, alien metamorph, abandoned on Earth as a baby, and who may well be the deadliest killing machine in the universe... These characters, all “strangers” to Earth, are brought together by TANKA, a former jungle lord who has been recruited by entities from our planet’s farthest future to be their “time agent” and is now empowered to protect our world from extra-terrestrial menaces.

In this thirteenth volume of Strangers, our heroes finally defeat the renegade Salamandrite Mr. 17 and its masters, the Wan Lords on Zhud... Bonus stories featuring Jaleb and Barthy-09! Guest-starring: Miss Meteor!