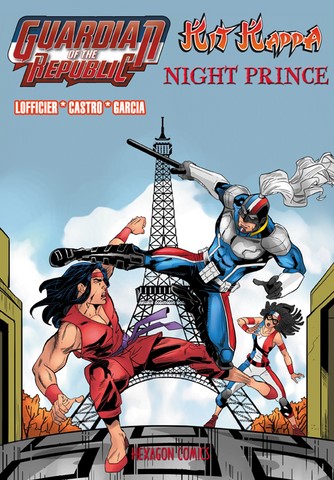 On Christmas’ Eve, during a particularly cold, wind-swept night, Parisians rush through the streets, eager to arrive home… Suddenly, an unexpected threat appears: NUMBER-ONE, a sentient robot created by the mad scientist ASTAROTH, has returned to wreak havoc on the French capital!

Only the GUARDIAN OF THE REPUBLIC, his sidekick MARIANNE, and the powerful NIGHT PRINCE can stop the mechanical killer. But behind Number-One looms the sinister shadow of its creator, long thought to be dead, who plots to use the robot to further a new, mysterious plan…

The GUARDIAN and MARIANNE, now assisted by KIT KAPPA and AGENT BOURASK of C.L.A.S.H., must uncover ASTAROTH’s real goal, and defeat him before he can inflict more destruction on the City of Lights…

This Santa-mental super-saga full of guest-stars and candy canes, is brilliantly orchestrated by Roberto Castro and Eduardo Garcia.