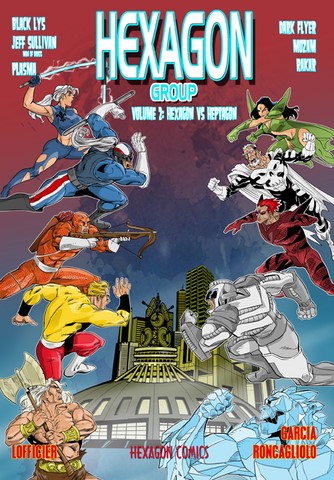 
The Hexagon Group was born either in 2002, when they made their first retroactive appearance in Strangers #1, or in the 1960s, depending upon how one looks at it.


Like The Justice Society of America and The Avengers, the group gathered together a single team of different heroes published by Editions Lug in their own series between 1964 and 1974.


There is Jeff Sullivan, a.k.a. the Man of Brass, descended from a long line of heroes; the powerful Dark Flyer; the beautiful Black Lys from France; joined here by a bevy of new members, such as astronaut Max Tornado; the African sorcerer Mozam; Gun Gallon, exiled from an extra-dimensional realm; the Lakota warrior Rakar; and Plasma, Jeff’s own daughter.

In the four stories collected in this volume, Hexagon faces the Heptagon group, an evil cabal comprised of its deadliest enemies; fight sJeff’s evil brother; teams up with the French Guardian of the Republic; and is almost defeated by the evil Necromancer.