Strangers 3: Of Gods and Men 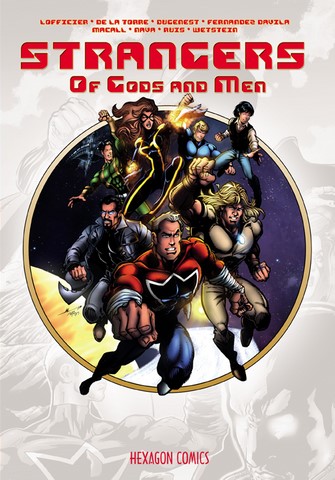 HOMICRON is a NASA scientist whose body is inhabited by a mysterious alien from planet Alpha. STARLOCK is the former servant of supremely powerful cosmic entities who has managed to escape from his Martian prison and is hiding on Earth. FUTURA is a mysterious woman from a parallel dimension. JALEB is the secretive agent of a Galactic Federation of telepaths. JAYDEE is a teenage, alien metamorph, abandoned on Earth as a baby, and who may well be the deadliest killing machine in the universe...
These characters, all “strangers” to Earth, are brought together by TANKA, a former jungle lord who has been recruited by entities from our planet’s farthest future to be their “time agent” and is now empowered to protect our world from extra-terrestrial menaces.

In this third volume of Strangers, which completes the second season of the series, the Strangers at long last confront the supremely powerful galactic entities known as the Towers, who desire to recapture Starlock. Meanwhile, Futura faces up to the deadly Zorr-Ko and the god Coyote, while Jaleb is hunted by the Galactic Federation. Special guest-stars:  Ozark, master of the Mystic Arts, Stormshadow, shaman of the Twilight People, and the Hexagon group!
Six full-length stories written by Jean-Marc Lofficier with art by Sergio Fernandez Davila, Mariano De La Torre, Anthony Dugenest, Alfredo Macall, Victor Nava and Alfonso Ruis.
Source Material: Strangers #13-18