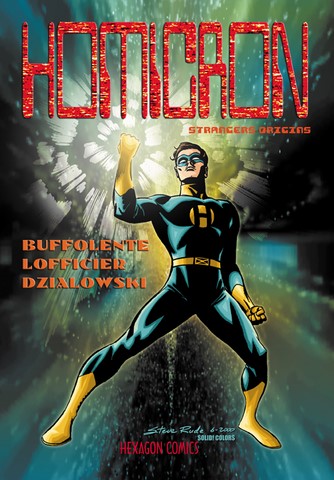 Contents:
- Foreword by Marv Wolfman
- Introduction by Jean-Marc Lofficier
- Classic Homicron #1-#2 by Lina Buffolente
- Classic Homicron #3-#8 by Paolo Morisi
- New Homicron #1-#5 by Jean-Marc Lofficier & Jean-Jacques Dzialowski
- STRANGERS preview.
An Apollo capsule crashes back to Earth. Its crew miraculously survives. But they haven't returned alone... On board is a mystrious entity from far-off planet Alpha... Thus begins the saga of the powerful alien known as... HOMICRON!
HOMICRON is a native of Alpha, a planet inhabited by a peaceful race of scientists whose Envoys turn into energy beings to explore the cosmos. After rescuing the Apollo 19 capsule, Homicron merges into the body of astronaut Ted White, and then later, into that of his fiancée, Dr. Rita Tower, a NASA physicist.