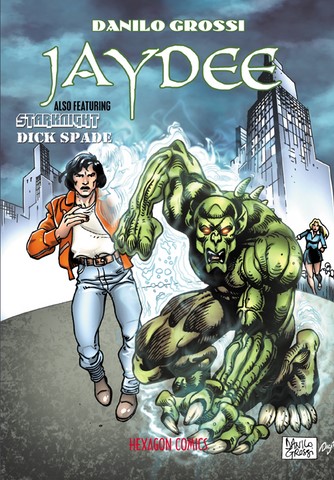 Jiohn Douglas ("J.D.") Emerson was found as a baby mysteriously abandoned in the Pennsylvania mountains. Now grown-up, young JAYDEE discovers that he has the power to change into any beast he chooses. But what is the secret of his origins and inhuman power?...
Also included in this volume are two other sagas by Italian artist Danilo Grossi: Tom Meadows, a California teenager, is transported across space to the Empire of the Three Nebulae where he falls in love with Princess Lyra and becomes a STARKNIGHT! Meanwhile, DICK SPADE, a fearless investigative reporter working for the San Francisco Morning News, uncovers a dark tale of conspiracy and murder...
Three classic series from the 1970s and 80s. Jaydee made a spectacular return in 2003 in Strangers. Foreword by Peter B. Gillis.
Source Material: Jaydee #1-8; Starknight #1-2; Dick Spade #1