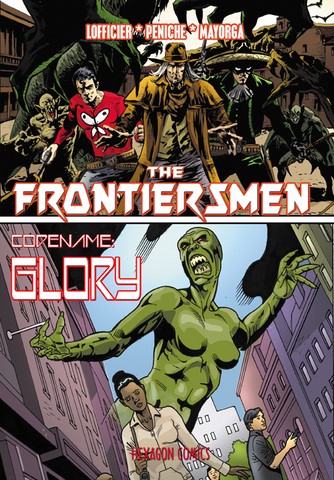 The Frontiersmen: In the 1860s, the U.S./Mexico border is the theater of strange phenomena, the appearances of monstrous creatures and supernatural threats. To fight them, Stormshadow, the powerful shaman of the Twilight People, gathers around him The Sparrowhawk, Don Juan Ortega y Perez, the legendary hero who fights injustice in war-torn Northern Mexico, and the mysterious Drago, a Texan Avenger trained by an Indian Shaman who is descended from a long line of heroes. In this, their first adventure, the newly-assembled “Frontirezos” must defeat the vampiric hordes of Shadrak, or risk the collapse of time itself….

Codename: Glory: Soeurette Lagloire looks like a young and pretty Haitian girl who’s come to New York to become a singer, but few know that she is, in reality, Jaydee’s sister, Salamandrite No.57, a terrifying living weapon created by the legendary Weapon Makers of Zade from another galaxy. Occasionally assigned perilous mission by her CLASH handler, she must now tackle the fearsome Zombie Master who lurks somewhere in the abandoned tunnels of the New York subway...