In modern times, Captain Giroflée, a descendent of the original Captain Giroflée, is a French Special Service ace in charge of security at the Cadarache Research Center in Southern France. He works for Général Matamore and Professors Jura and Meyzin-Petard. He once enlisted the help of the Lunatic Legion to protect the Center from an attack by the modern-day Mooks Gang. It has recently been revealed that he is capable of transforming into the super-strong, near-invulnerable hero known as the "Dindon de la Force" (Power Turkey).

To be included in the volume dedicated to The Lunatic Legion. 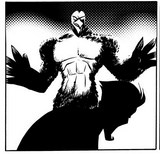