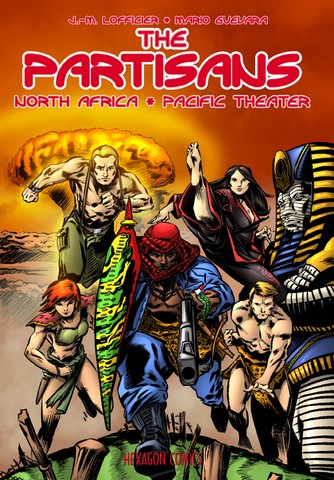 1942. North Africa. Under the direction of Erwin Rommel, the Nazis prepare to seize the mysterious city of Heliopolis, once the home of the mythical Egyptian gods and the depository of all their secrets. This will insure Germany’s victory and her domination of the world.

But in order to stop him, French General Leclerc has gathered a team of PARTISANS, comprised of Baroud, the Guardian of the Republic of Senegal, the amazon Antales, young Tanka, the legendary Imhotep, and the powerful Wazilla.

1945. Pacific Theater. The Americans’ plan to seize Okinawa is compromised by the sudden arrival of a powerful alien, Lord Manduk of Vaur, who teams up with the formidable Japanese scientist known as Madame Y.

This book presents two World War II sagas about crucial events that, if allowed to unfold, might well have changed the course of history, without the intervention of the heroic champions known as… THE PARTISANS!